Fall is my favorite season and November is my favorite month of the year. While I don’t love the earlier nights, the cool weather and changing leaves make spending time outside awesome! Anna gets mad because riding horses takes a back seat to hunting. Today was about as good as it can get.

I didn’t have to drive any kids to school this morning (election day) and temps dropped into the 30s last night. I headed out into Pachaug State Forest from our house and was in my spot in under 10 minutes. I had been in place for all of 3 minutes when I heard deer moving towards me through a creek. I took the shot with my crossbow the minute shooting was legal and recovered the 7pt, ~180lb buck 30 minutes later. Not bad for my first deer hunt of the season.

Since the hunt was so short, I decided that I would do a little work for the day, but I couldn’t resist another hunt in the afternoon. This time, I decided to take Rusty over to some state forest where pheasants are stocked. It was a great afternoon for a walk and Rusty did his job finding some nice birds.

Life is too short to spend every day in the office!

CT’s archery deer season opened on Sept 15th.  This afternoon after work, Alex and I headed out to some private land where I have a 2 seater ladder stand.  Alex and Vicki both got to go out with me last year (1 at a time), but I hadn’t taken any deer with them in the stand.  Alex was on lookout duty with the binoculars.

It was a nice afternoon, so I leaned back against the tree and told Alex to wake me if he saw any deer.  A few minutes later I felt him bump into me with his elbow as he shifted in his seat.  The he did it again.  I opened my eyes and he was glued to the binoculars looking straight ahead.  I glanced at the ground in front of the stand and saw 3 deer moving in at 35 yds away.  I whispered “you could have warned me sooner” but apparently they had materialized out of the brush.  A few minutes later, the large doe paused long enough broadside at 25 yards for me to take a shot.

We needed to wait a while anyways, and I heard her hit the ground not too far away, so we settled back into our seats.  After all, we still had 1:15 minutes of hunting time left.  Over the next 45 minutes, we were treated to a pair of young does hanging out about 15-30 yards from the stand and another mature doe 40-50 yards away.  If the mature doe had ever been in a clear lane, we would have doubled down on the harvest.

Alex helped me follow the blood trail, field dress, and haul the doe out.  She was a very nice mature doe. 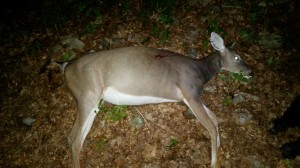 I stopped by the house to drop off Alex who was cold; it’s already getting into the 40s at night in September!  Vicki is excited that she gets to spend some time hunting with me, and Amanda is a little disappointed that she isn’t old enough yet.  But Amanda is quite willing to inspect the harvest. 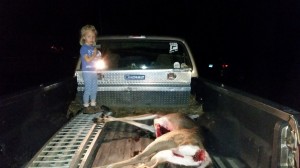 Last year, Alex and Vicki expressed some interest in shooting as part of Tetrathlon. Tetrathlon is a Pony Club competition that includes swimming, running, jumping (the only portion that involves a horse), and pellet pistol shooting. I introduced them to shooting, but we didn’t make much progress.
This year, I decided to build a target range in our basement since we had enough room.
I started by using some old dividers to create a lane down one area. Then I used some plywood to create a backer so the pellets and bb’s are not hitting the cement walls. Finally, I added a new light to illuminate the targets.
Alex and I  finished this evening and have it a test run. The plywood is bouncing the bb’s back towards the shooter. However, the pellets have enough force to embed in the wood. I am going to look for some high density foam to stop the bb’s from bouncing.

The table is adjustable in height which works well for the kids right now. We are currently spring at 20 feet, but have enough room to make it an actual 10m range, which is the competitive distance for tetrathlon.
Now, each evening after dinner, we can go downstairs for a few minutes of target practice! 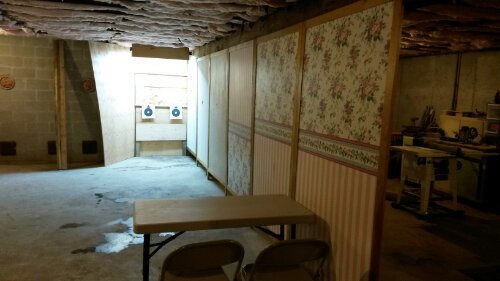 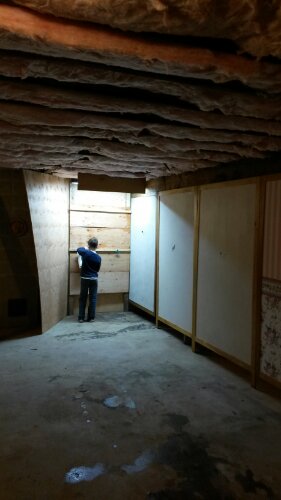 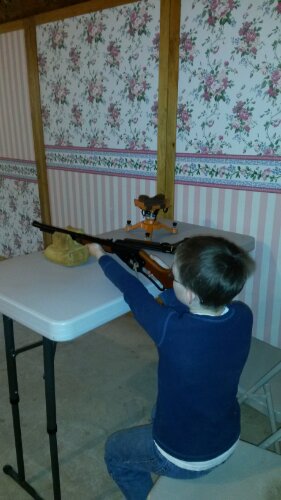 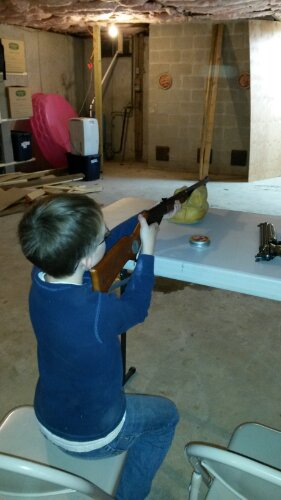 This afternoon Vicki and I went out for a short hunt after I got home from work. This was special because it was her first time to go hunting in a tree stand with me. We didn’t see anything , but as a climbed down, some deer started snorting nearby. She is excited to go again soon. 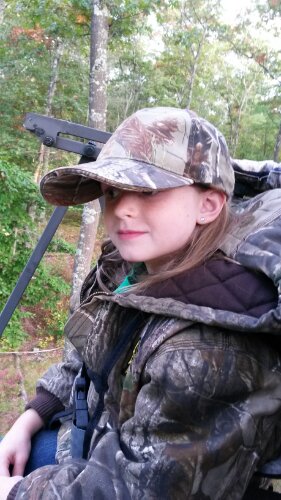 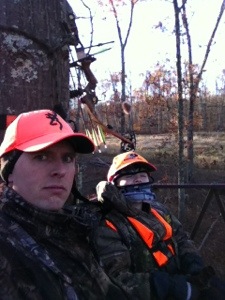 Today at work, I ended up with an unexpected open afternoon. Cold snap last night, bad weather coming tomorrow, first week of November, and Alex was out of school! I headed home at lunch and loaded my new (off Craigslist) 2 seater ladder stand in the truck to take Alex out for a hunt, his second with me this year. Earlier in the season, I had hunted a new property and found a promising area that I was saving for this new stand. However, when we got there, I was disappointed to find another stand in the same area. Ok, we can find a different spot on the property.
However, I also found a pile of apples and a corn feeder. While I am completely supportive of baiting, I limit my baiting to legal areas only. This bait pile is illegal. I’ll let the landowner know (because I know he didn’t put the pile out), but it gave me the chance to discuss with Alex the legal and ethical aspects of hunting.
It was disappointing that I won’t be hunting there anymore, but it was an excellent teaching opportunity for my young hunter wannabe.
I’m sure he will explain it to his sisters when we get home since they were both disappointed that they didn’t get to hunt this year.