This afternoon, the temps were about 54F.  So, I put on my running SHORTS! and strapped Amanda into the jogging stroller.  Alex hopped on his bike, and I got out the nicer leash for Mack to come along.  And then, we ran (Alex biked) for just over a mile, turned around, and ran back.  It was at about a 9:30 pace, which is pretty slow for me.  My legs are already a little sore.  Oh yeah, that is the FIRST time I have been running since my concussion in early January.

The past two weeks have been significant improvements for me.  While yesterday, I did come home from work with a migraine bad enough I needed to take some meds and head to bed, that was the first time I had to nap in over a week.  In fact, I have only taken meds for a headache about 2 times in the past 2 weeks.

While I know I am not back to 100% and I don’t intend to rush things, it is nice to finally feel like I am making progress.  I am also happy to report that I no longer need the reading glasses prescribed by the optometrist.

In May of this year, I participated in a Ragnar relay with a group of friends.  Ragnar is a relay race that lasts about 24 hours and, in this case, covers about 175 miles.  My portion of the relay was 3 legs of running totaling about 24 miles.  Afterwards, my sciatic nerve was bothering me, so I took it easy leading up to the Mystic YMCA triathlon at the beginning of June.  The race was only a sprint distance, but my lack of bike training showed as my times didn’t really improve over the previous year.  Then, in June, I got sick with a bacterial infection in my intestines.  I didn’t swim, bike, or run for over 6 weeks.  That made it official that I wasn’t doing any more tris this summer.  Without the tris, I had no goals related to fitness.  That was fine, I needed to focus on my Equine Sciences studies, and with the increasing trimming business, it was easy to push the workouts to the back burner.  Before I knew it, I was only working out a couple of time a month.  Then my sciatic nerve started bothering me again because I was still doing occasional hard and fast runs, but didn’t really have the fitness to support the effort.  That’s when I realized, I was off the wagon.  I haven’t done laps in the pool but twice in the past 6 months.   I haven’t ridden my bike for training but once in the same time.  I was even considering getting rid of my winter biking apparel.

Then, at dinner the other night, Vicki asked a question completely out of the blue.  “Daddy, how do people get diabetes?”  I imagine the fact that Grandpa had just been visiting had something to do with it.  Regardless, Anna and I ended up in a conversation about diabetes and healthy life choices.  It made me realize, I had abandoned my fitness regimen, and put my health at risk.

Today I got back on the wagon.  I might fall off again, but just like in horseback riding, you have to get back on.

Sometimes it is good to go back and review out goals from the past.  In case you missed it, this is my story to fitness, when I got on the wagon in the first place.

This is my story to fitness.

In January of 2009 I was at a personal crisis with health, career, and family stress.  I knew that I could not continue on my life path in the same way without losing something; I felt like I was near the breaking point and my marriage and family were at risk.  I weighed almost 200 lbs, wore a size 38 pants, and couldn’t walk up stairs without getting winded.  My hair was always greasy and I was unhappy, mostly because of my appearance and health risks I had developed.  While only about 30 lbs overweight, in the military, that made me the fat guy.  My single biggest fear was diabetes.  The family history, my lifestyle, and my weight made me worried that every time I had blood work done, the results might indicate diabetes.

I realized the changes were within my control, and no matter how many external factors contributed to my choices to that point, I was to blame for my health.  In February 2009, I quit smoking and chewing tobacco.  I tried to develop a workout routine, but while at sea I was only able to manage 2-3 workouts a week.

In May 2009, I transferred off USS Annapolis at 195 lbs.  The job change relieved most of the professional stress and gave me the time I needed to decompress mentally.  I started a regular workout routine and set a goal to lose 20 lbs.  At first, I could only run short distances and was at >11:00/mile.  Others in my office were into cycling, so I began to use my mountain bike to ride to work occasionally.  It was 7 miles each way and took over 40 minutes when I started (about 10 mph).  I enjoyed swimming some because it was low impact; 1000 yds was a long workout at the time.

By October 2009, I had worked up to running 5-6 miles at a time, but it hurt and took a few days to recover.  A friend from the Annapolis who had started a very similar journey at the same time was preparing for his first marathon in November and was running 20 miles.  He had decided to do triathlon training after the marathon and was going to race in 2010.  Since I am a goal oriented person, triathlons seemed perfect for me to keep a varied workout schedule and continue on my fitness journey.  Along the way, my mental health had recovered and I was gaining satisfaction in all areas of my life.

The idea of competing in triathlons re-invigorated me.  I bought a used road bike and continued to occasionally bike to work.  I ran more often and faster.  I swam more.  By January 2010, I weighed 186 and realized my workouts were not resulting in the weight loss I desired.  I started to focus on my diet and, on the advice of my wife, finally began a food log in March.  I ran a half marathon (the first in my life) on February 28, 2010.  My goal was under 2 hours; I completed it in 1 hour 57 minutes (8:59/mile average pace).  Goal met.

As Spring in New England arrived, my training intensity increased a bit.  I worked out every day.  My weekly averages were usually >800 calories burned a day from exercise.  49 weeks after setting my 20 lb weight loss goal, I completed it.  I am now at 171 lbs.  I had to replace all my pants with size 34’s.  I recently completed a 2.7 mile race at a 6:59/mile pace (over 4 minutes per mile fast than a year earlier).  Now the only family stress is when I haven’t worked out and feel cooped up – my wife sends me running to fix it.

My first triathlon was the Mystic River Valley sprint triathlon in Mystic, CT on June 6th.  I wasn’t nervous, I was ready.  I had been training for 7 months.  I completed the race in 1:20:19 which was 76/254 overall, 6/15 in my age group, and my family was there to cheer me on, including a new 2.5 week old daughter.  By the way, that friend I mentioned ran the same race, also as his first triathlon, and placed 10th overall.

I no longer worry about diabetes myself; however, I worry about the rest of my family and friends.  So 1 week later, on June 13th, I biked 100 kilometers for the American Diabetes Association Tour de Cure.  I raised over $500 for the ride and it was the longest bike ride I ever completed in one day; I specifically chose that event because of the significance diabetes played in my choice of fitness.  June 17th was my second triathlon.  I’m hooked and have races planned for about every 2-3 weeks through the summer.  I chose fitness.

I have shared my story because I hope you will also choose fitness.  Start small, but dream big.

Today was the annual North Stonington Education Fund 5k race with kids races.  Since the race starts only 3/4 mile from our house and supports the local schools, we decided to attend again this year.  I ran to the start, Alex and Vicki rode bikes and Amanda rode in the trailer behind Anna’s bike.  Of course it was hot and humid (73F and 80% humidity).

Vicki and Alex had fun running their 1/4 mile and 1/2 races respectively.  Alex ran just over 6 min for the 1/2 mile, but was a bit slow because he was running for about 30 minutes while waiting on the race.

I actually set a new PR (Personal Record) for the 5k (3.1 miles).  I ran a 20:39, which is more than 3 minutes off my time from the same race last year (which was a PR last year).  It was also good enough for 1st place in my age group.  I still have some work to get below the 20 min mark, but I am pretty pleased with the race.

I have completed my contribution to our Ragnar relay. My final 6.3 miles were run at a 8:33/mile pace. My hip was very tight and that was my limiting factor for speed. Overall, I am extremely pleased with my running. I ran 24.3 miles at an overall average of 8:00/mile!

I finished my second run. 9.3 miles at a 8:00/mile pace, in the dark. Again I was faster than anticipated. I killed 8 on that leg and finally got passed. Apparently there are only about 17 teams left ahead of us. Of course, theoretically, the faster teams actually started behind us so we should start getting passed by faster teams. Time will tell.

I survived my first run of 9 miles. I ended up running a little faster than planned: average 7:32/mile for 9 miles. Hopefully I won’t regret that later. I did get 11 kills (overtaking another runner).

That is for best fashion, van decorations, and team name. 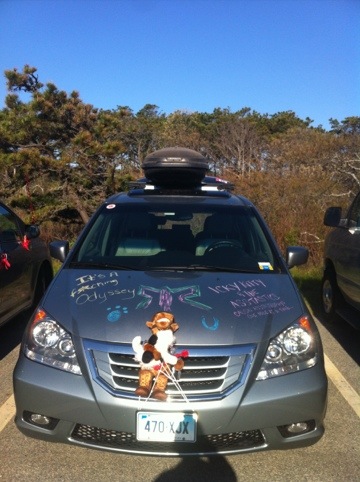 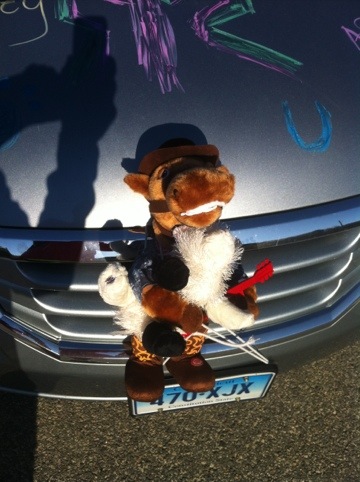 A couple of months ago, some running friends asked me to join their Ragnar Relay Team. From the Ragnar website:

“Ragnar is the overnight running relay race that makes testing your limits a team sport. A team is made up of 6-12 individuals; each individual runs 3 legs. The legs of the race vary in difficulty and distance, from 3-8 miles, allowing elite and novice runners to run together. Over 2 days and 1 night, teams run across 200 miles of the country’s most scenic terrain. Pair that with crazy costumes, inside jokes, a great finish line party and unforgettable stories. Some call it a slumber party without sleep, pillows or deodorant. We call it Ragnar.”

So today, I will join a large number of people who have decided to pay people for the privilege of running a lot. We are running Cape Cod, from Plymouth, MA to Provincetown, MA for about 186 miles.

I am runner #7 on our team and my total is 24 miles. Hopefully I will still be able to walk when this is over.