First, Thank You to everyone who supported Sawyer Family Farm in 2012!

Last year was marked by significant growth and trying new things on the farm and we learned a lot.  When we started our farm, it was with the intent to provide healthier food for our family, that we could trust was free of antibiotics, artificial hormones, injected juices, and all the other things that we don’t know about in the mainstream food supply.  We are well on our way to achieving that goal.  Frequently last summer, we were able to serve entire meals with items produced exclusively on our farm: meat, vegetables, and dairy products.  We enjoy raising the animals, however, it is a lot of work (just ask our farm sitter who experienced the life for 10 days while we were gone at Christmas)!  A frequent conversation starter at our house is “What do we enjoy, what do make money at, and what isn’t worth the money.”

Eggs: There is a constant demand for our eggs.  We love the idea of having a cooler at the end of our driveway to sell fresh eggs to local neighbors, however, after losing around $100 in coolers, eggs, and money, we had to stop.  We have been providing eggs to other groups such as Wesleyan University Food Co-op and for sale on CT Farm Fresh Express, however, our local customers come first, so if you still want our fresh eggs, give us a call.  2013:  We will continue to have fresh eggs available, however, we will not expand our laying flock. NOTE: we are getting ready for chick hatching season soon, so eggs may not be quite as available as we set them aside for hatching.

Meat Chickens: Wow.  I never expected so much demand for the meat chickens.  We ended up selling almost half of what we planning to keep for ourselves, but that is ok, because we have been eating more rabbits.  In 2012, we tried Freedom Rangers as a meat chicken and also raised more heritage roosters.  While we didn’t raise any Cornish Cross, we did process them on a number of occasions for another farm.  While the Cornish Cross get bigger, have more breast meat, and are ready in half the time, we have decided they WILL NOT be raised on our farm.  Additionally, we will not raise the Freedom Rangers again.  We have decided that we prefer chickens that move around, scratch the grass, and act like chickens, even if that means it takes longer to raise them at a slightly higher cost.

2013: We will still raise some chickens as meat birds.  However, based on the time it takes to process when they are all ready (and our extremely busy weekend schedules), we will likely have a very limited number of chickens available for sale.  These will be offered to previous customers first.

Chicks:  We hatched a lot of chicks in 2012 on a continuous hatching plan.  This year, are going to try a very different approach.  Stand by for an update on this within the next week.

Turkeys: Turkeys are stupid.  That’s all there is too it.  While we did get excellent feedback, we haven’t decided if the turkeys are worth the trouble.  It was definitely more stressful than I anticipated as we approached Thanksgiving and realized many of the birds were going to be smaller than expected.  We haven’t decided what future turkeys will have on the farm, however, we are committed to the heritage breeds if we raise them again.

Rabbits: This has to be one of the more frustrating areas of the farm.  The rabbits are easier to care for than the chickens, easier to breed year round, and require less work.  However, due to the feed costs, they are more expensive, which I think is negatively impacting our ability to sell more rabbits.  Additionally, since rabbit isn’t a mainstream food source in the US, many are reluctant to try it.  Rabbits are not going away (in fact we would really like to expand).  We have a few ideas about what we might be able to do in order to lower costs for feeding.  Stand by for a new project announcement in the near future.

Goats:  We love the goats. They are just fun.  The human kids enjoyed showing last summer at the North Stonington Fair, and this year, in 4-H, they will show goats a little more.  Last summer, we used the milk to drink (a lot), make ice cream, and make soft cheese until we got tired of goat cheese and wine (which takes about 3 months, every evening after the human kids go to bed).  Right now we have 9 does that we think are all bred.  Kidding season starts in February and continues into early June.  We haven’t completely decided on how large our dairy herd will be in the future, however, we do plan to sell a lot of kids (goat version only).  Anna has grand plans to make hard cheeses (as soon as I buy or build a press) and soaps.  That’s right, we will be selling Goat’s Milk soap and other skin care products in 2013.

Beef: We didn’t do anything with raising beef in 2012.  However, we did by half a veal calf from some friends who also raise goats, and the meat was fabulous.  We got 40lbs of meat from our half calf.  Our plan is, buy a bob calf (male dairy calf) at less than a week old.  Switch it over to goat milk and raise it for 2-3 months.  The calf will live with the goats and be raised on milk and hay – no grains.  We will pre-sell the calves as a whole or half calf and you pick up your meat at the butcher.  More info and pricing will be available in the future, however this will be a very limited commodity.

Horses:  Anna has been teaching some lessons.  She is very good at it, even if she doesn’t believe that herself.  At dinner the other night, Alex even stated his favorite riding instructor was his Mom!  This year, we expect to continue to expand our horse involvement as the kids are more active in Pony Club and Anna and I try to riding more hunter paces for ourselves.  We became dealers for a number of horse care products, primarily as associated with my trimming work.  Horses have always been our first passion, and we are always challenged to make time for that as the other activities on the farm grow.

Continue to find efficiencies on farm.

The turkeys are now about 2.5 months old and have been moved onto pasture. We are planning to keep them on grass with and grain until ready for harvest just before Thanksgiving. Based on advice from others, we kept them on wire until now. Initially, we had 2 of the 14 die within the first 2 weeks. Since then, they have all survived.
Now we have to hope they don’t fly out of the electric net fence. 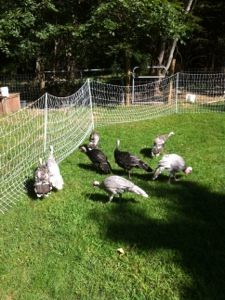 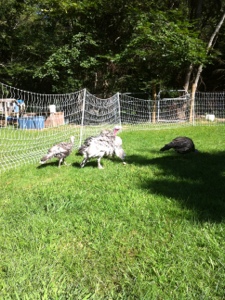 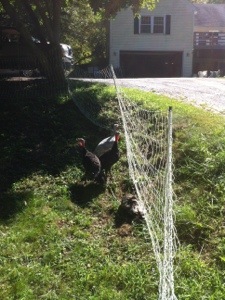 Since we are on the kick of raising our own food anyways, why not raise turkeys too?  We placed an order back in February from another local farm that keeps Narragansett and Blue Slate hens with a Narragansett tom.  As a result, we have some pure Narragansetts and some crossed birds. This morning, Anna picked up the 14 poults (10 are a couple of days old and 4 are a week old).

We have been researching raising turkeys and plan to try and give them as much grass access as possible with our portable electric fence, however grain will be a big part of their diet.  My research has a lot of conflicting information about what we should expect for weight at harvest time.  Some people report 8-16lbs (hen/tom) while other have 16-25lbs averages.  All I know is, we have about 22 weeks until harvest right before Thanksgiving, and I will have a better idea of our results in November.

The biggest gamble for us is setting the price for the birds now.  We prefer to have an incentive for people to make an reasonable advance deposit on the turkeys to offset feed/raising costs, and that only works if I set a price now.  We know that Ekonk Hill Turkey Farm sold heritage turkeys in 2011 for $8.99/lb.

You may reserve a Sawyer Family Farm turkey for $40 which will lock in a price of $8/lb at harvest.  I am only offering 8 birds available for deposit (and 1 is already paid for, leaving 7 left).  The remaining birds will be retained by us for our own freezer or as breeding stock.  It also allows for possible loss along the way (turkeys generally have a higher mortality rate than chickens).  If there are any birds left available in November, they will be sold at a higher price than those reserved in advance.

What if you don’t want a bird that will be 22lbs at $8/lb?  I will be monitoring the growth of the birds along the way.  If you want a particular size bird, and don’t mind having it harvested early to go in your freezer until Thanksgiving, we can do that too!

If you are interested in placing a deposit on a turkey, please Email with the number of turkeys you would like, and any rough size preference (10-15lb, 15-20lb, etc) and I will send you an invoice via PayPal.