On Friday morning, Vicki’s team gathered up at 0700 to verify their scores from the previous day.  The worked as a group to polish their boots prior to the final phase of competition, Barn Phase.  They entered the final day in 1st place, but with only a 3 point lead on the 2nd place team.

Once they were done with Barn Phase, we spent some time watching the stadium jumping for eventing in the Rolex Arena and Jr Games final round while we waited 9+ hours for awards. 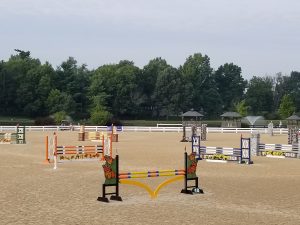 We visiting the Saddlebred Museum (King is a 1/2 Saddlebred) and enjoyed the air conditioning.  Vicki hung out with her friends from her team since they all live about 3 hours away.  She spent time during the week trading pins from her Region with kids from other parts of the country.

Once it was time for awards, all the Quiz teams went into the covered arena together.

Alexis is Vicki’s best friend and also in the same Club.  She was on a different team from Vicki and was the highest scorer on her team, helping them get 5th place. 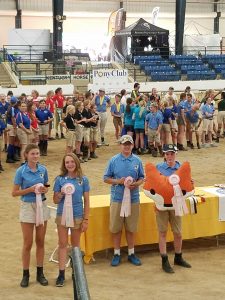 Vicki’s team wasn’t able to hold on to the 3 point lead.  In the end, they got 2nd place, but were all smiles as they collected red ribbons, silver medals, and a pair of boot socks.

After team awards, individual awards were announced.  At the Regional Rally to qualify for Championships, Vicki had the highest individual score.  She again led her team and won 5th overall in her Junior D division.

Now that she has done Champs in Quiz, she wants to ride next year in Games, Show Jumping, or Eventing.

We decided to just drive on home and not do any sightseeing on the way back, so days 9 and 10 don’t have any pictures.  Overall, it was a good vacation and we enjoyed visiting Lexington.  I am thankful my parents were able to come up from Alabama to join us and spend time with the kids.

We are officially on vacation!  Back in the winter, we told Vicki that if she qualified for Pony Club Championships in Quiz, she could attend Champs and 1 day of Breyerfest.  Well, she did and we are now on our vacation in Lexington, KY to hold up our end of the deal.  We found a gas station with a porta-potti and managed to avoid a crisis, however, traffic was normal (read crappy) and it took a while to get through NY.  In fact, we traveled about 400 miles for the first day on the road and only averaged 41 mph on the roads  – that’s actual cranked car time, not including stops.  Obviously, we encountered a lot accidents, traffic jams, heavy rain, and in general other bad driving conditions.

Since we were not in a rush for our trip, we decided to do something fun each day to break up the driving.  The activity for Day 1 was Hershey PA.  We stopped off and did the “Factory Tour” and “Chocolate Tasting Experience”.  The kids enjoyed it and it wasn’t too bad, although we didn’t buy anything from the exorbitantly priced store.

When we made it to Maryland, we stopped at the rest area and Fireflies were out.  The kids enjoyed a few minutes of chasing them around the grass before climbing back in the car.  Here’s a video Anna took of the kids running around after the Fireflies.

We stopped for the night at almost 10pm at Holiday Inn in Hagerstown, MD. The kids were happy to hit up the pancake machine this morning before we continued on the journey.

Today’s stop was at the Clay Center in Charleston, WV.  The Clay Center is part of the Blue Star Museum program which gives free entry to military and it has a science center and art museum.  The kids enjoyed exploring the science exhibits and climbing on the 3 story climbing sculpture.  The exhibits were well designed to target kids, interactive, and engaged across the age spectrum.

Vicki was looking forward to the art exhibits, which was only a small area, but satisfied her desire.  Everyone had to choose their favorite piece of art and explain to the family why they chose that one.

After our break, we continued the drive to KY! 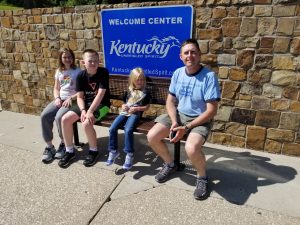