It was an exhausting weekend as we kicked off the 2014 fair season with the North Stonington Fair.

Thursday, 8 rabbits reported for show duty and spent the weekend looking pretty for the masses.

Friday, Anna and the kids spent the day washing goats, washing horses, and Anna was up past midnight braiding manes.  Saturday morning, we loaded the trailer and headed to the horse show.

Amanda rode on Huey in the lead line class.

Jack, one of Anna’s students, also rode lead line on Devil.  Vicki rode Devil in the walk-trot classes along with her best friend, Alexis, who was on Huey.  Alexis actually beat Vicki for the walk-trot championship (in her first show ever).  It does Vicki good to get taken down a peg every now and then.  Alex has no interest in the ride around the arena classes, however, he was keen to ride in the Gymkhana classes.  He did the mounted games at the 4-H show in May with Dakota, so we let him do it again, only this time, we let him canter Dakota.  He did come close to the fastest times, but he maintained control and had fun doing it.  He even decided to add-on a 1 walk-trot-canter class for the day.

After the horse show, the kids put on their new Barnyard Buddies 4-H shirts to walk around a few minutes, but needed a food and drink break.  Ruth is another one of Anna’s students who came along for the day to watch Amanda, but seemed to get bitten by the show bug and is talking about getting more serious in her plans with King. 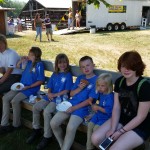 Sunday was the goat show.  We had 11 goats with 5 kids (Alex, Vicki, Amanda, Alexis, and Selena) our herd.  Amanda got to show Sprout in Pee-Wee showmanship and the Pet class.  Another long day, but everyone had a good time and Alex is actually starting to get more into the goats.  Sawyer Farm’s Onyx won Best Jr Lamancha and Sawyer Farm’s Sequoia won best Jr Recorded Grade.

Throughout the afternoon, WCTY was doing karaoke next to the goat show, and the kids were constantly on stage giving it a try.  Amanda and her friend Lily spent almost all afternoon on stage.

2 weeks until the next fair!

This weekend was the North Stonington fair. We had rabbits that spent Thursday-Sunday at the fair. Vicki showed Devil and WON the walk trot division on Saturday. I showed King; we had fun and won a class, but didn’t do great overall. Unfortunately, King was lame after the show from a coronary band injury, likely sustained while evading Huey in the pasture.
Sunday was the goat show. This was only the second time the kids showed goats; the first was the same faerie last year. After a difficult showmanship class for each of them, things improved. They both had fun and resolved to learn more to be better prepared for showmanship at the 4H fair in 2 weeks.
Here are some pictures from the weekend. 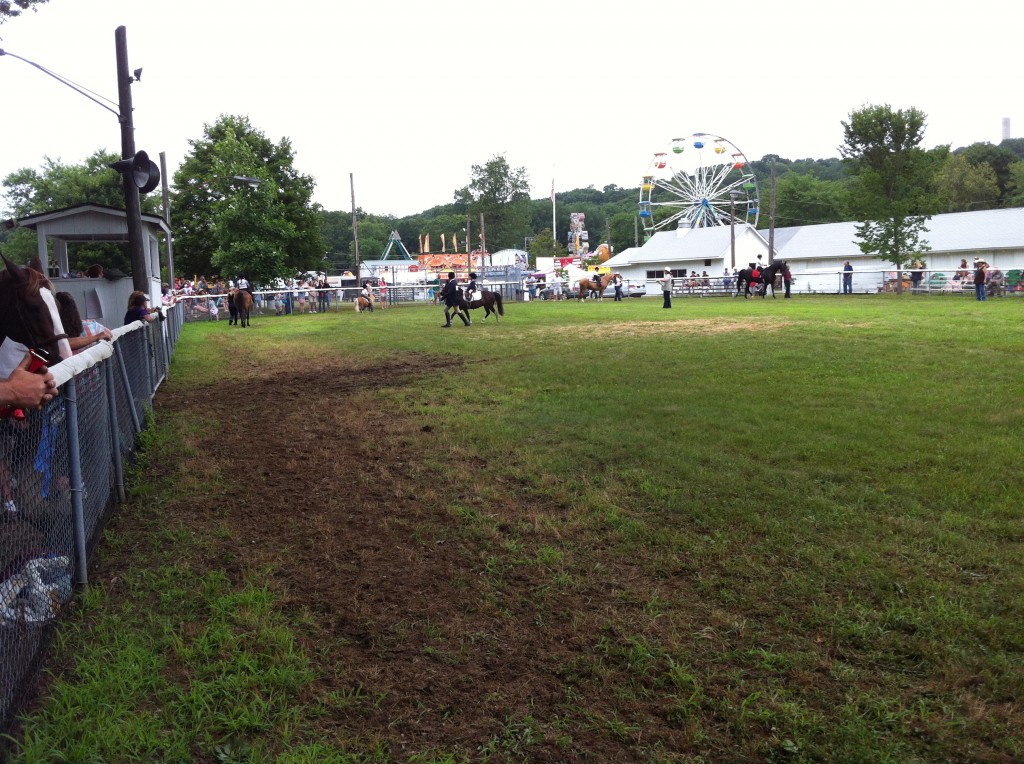 Rob and Amanda on Devil for lead line 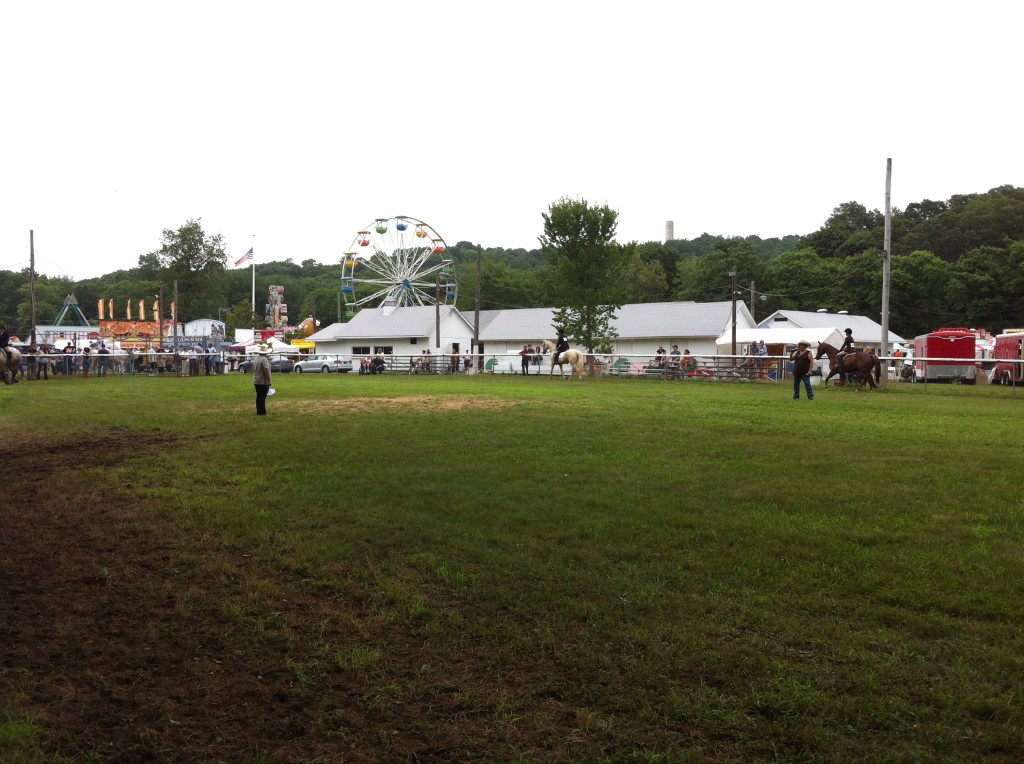 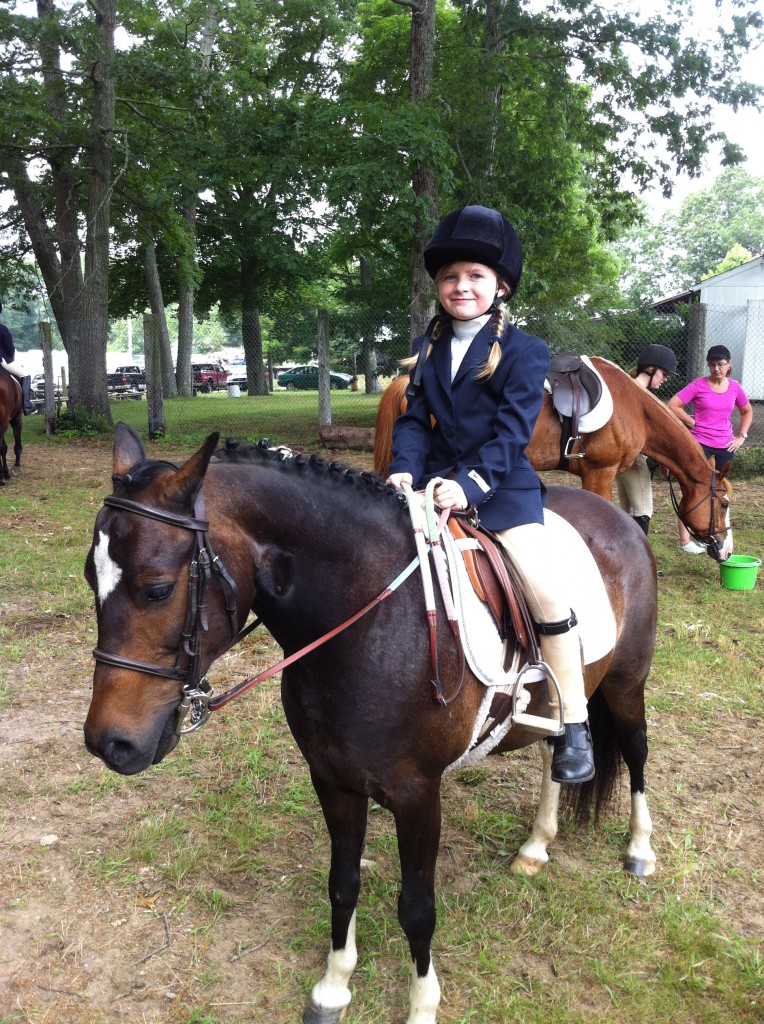 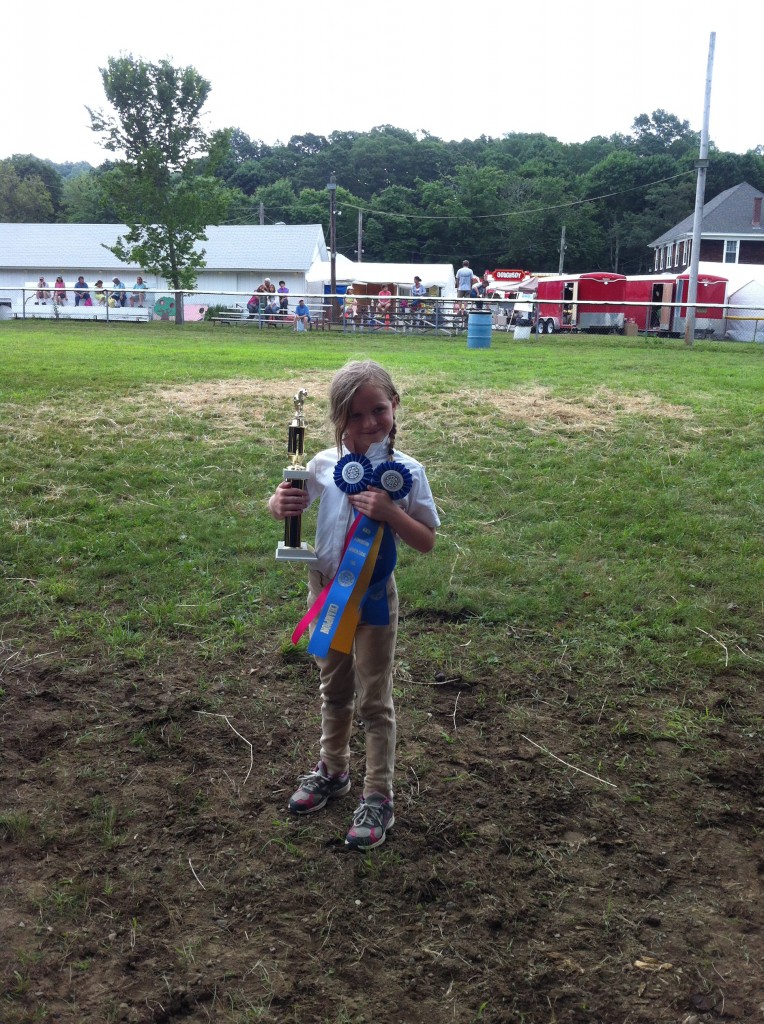 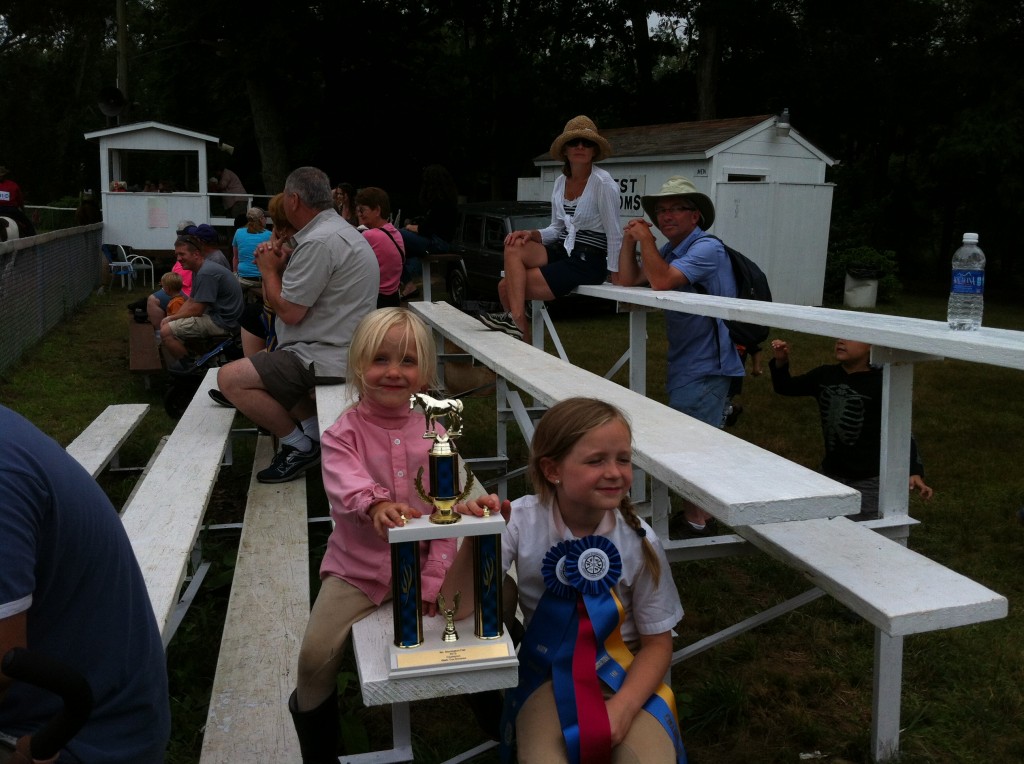 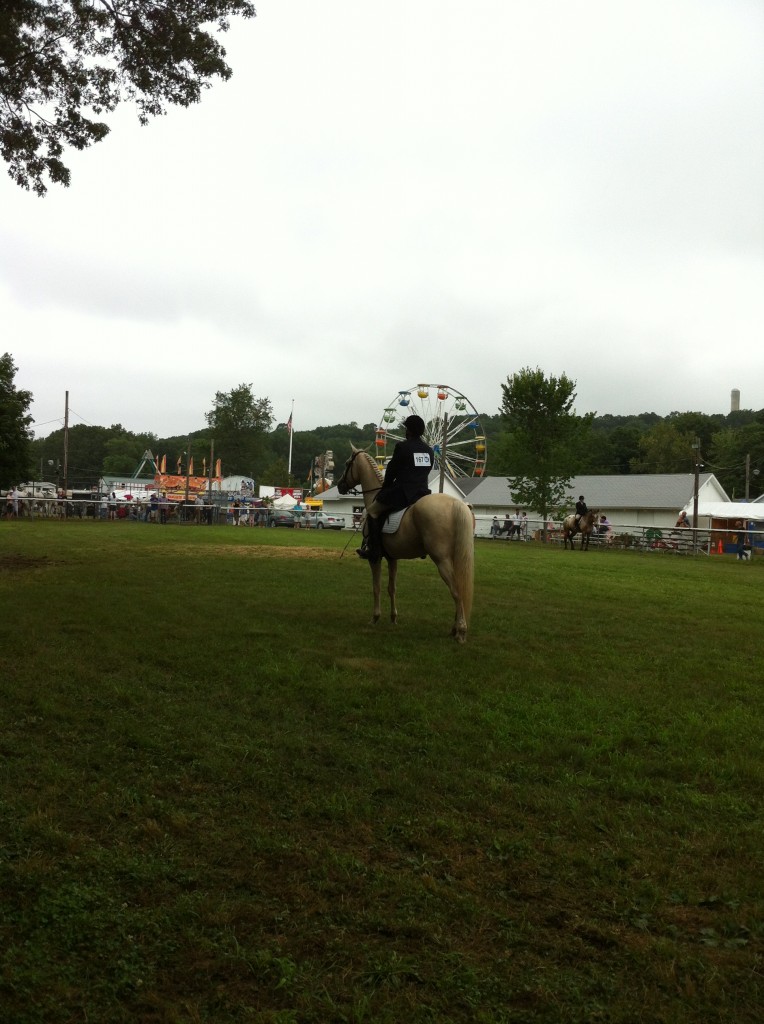 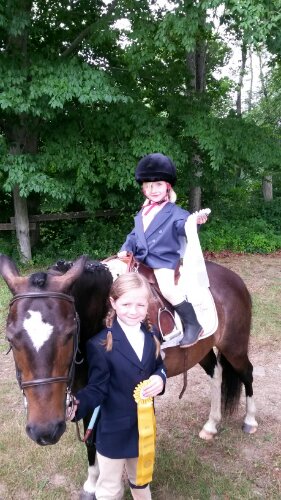 Vicki and Amanda with Devil 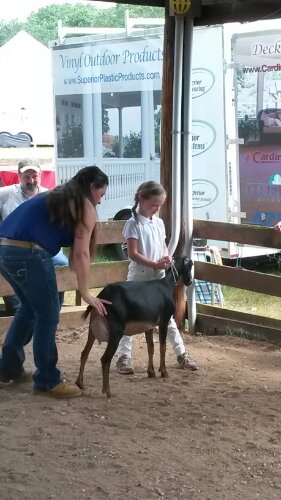 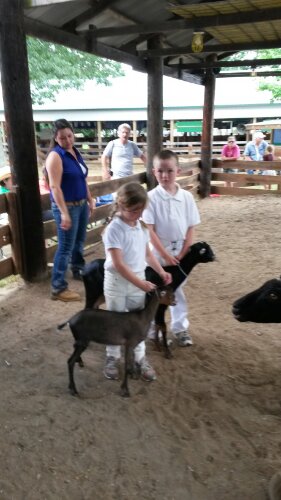 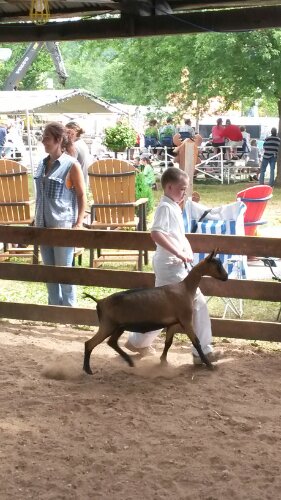 Nights in the barn, cleaning tack and loading the horse trailer. 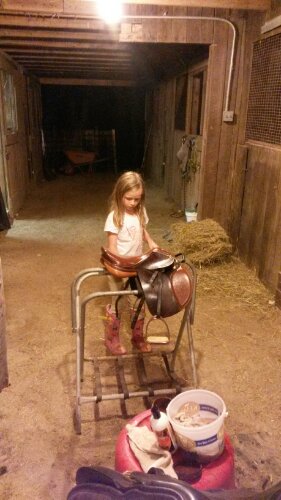 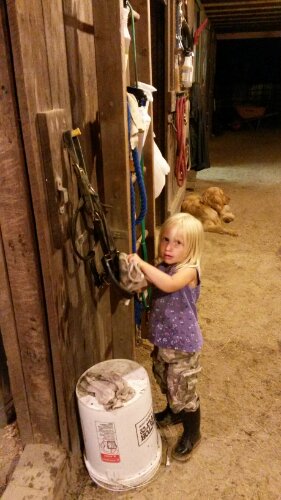 Tomorrow is the North Stonington fair horse show. Vicki and I will be riding Devil and King. Amanda will ride lead line. 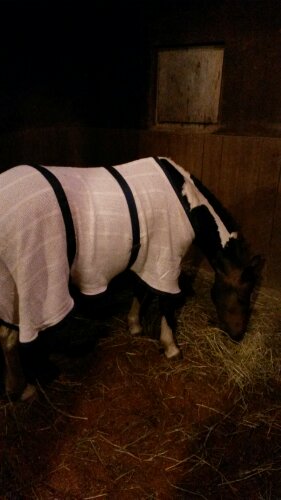 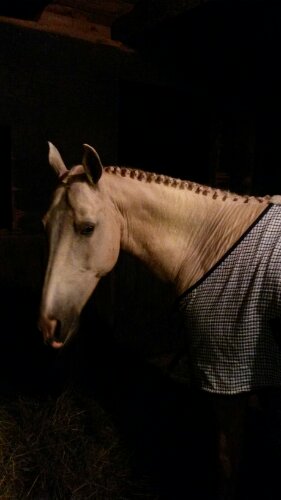 Alex had his first horse show at the North Stonington Fair!  He rode Precious in 3 walk-trot classes and got 2-4ths and a 3rd.  His favorite part? Getting the ribbons.

Vicki had her first horse show at the North Stonington Fair! She rode King in a lead line class, with me as the lead holder.  She got third and can’t wait to show more.  She is actually ready to show in walk-trot, but Devil needs a little more reovery time first.

Anna had her first student enter a show!  Kenzie rode Precious in the lead line class with Vicki.  It was also her first show ever and she had a ton of fun!

Since King was already there, I rode him in 5 classes.  I managed to get 1st in 2 of the classes and won Grand Champion in the English division.

6 of our rabbits got 1st place in the rabbit show at the North Stonington Fair, and one also got Runner Up for Open Show Champion!

After about a year of owning goats, we finally sold our first goat.  That was followed about 30 minutes later with our second and third sales of goats to a different family.

Tomorrow we will have our first goat show!  The main focus for tomorrow is to learn about showing and make sure Vicki and Alex have fun doing it.