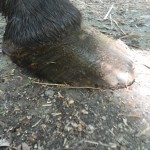 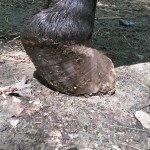 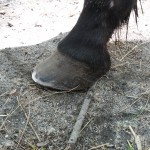 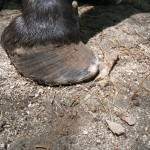 When someone sees the sign on the side of my car advertising “Natural Hoof Care” they ask me what that means.  For the average person, I explain “You know how a farrier puts shoes on a horse?  I am a barefoot trimmer and specialize in un-shoeing a horse.”  I guess it’s time to change my answer.

According to Wikipedia, a farrier is a specialist in equine hoof care, including the trimming and balancing of horses’ hooves and the placing of shoes on their hooves, if necessary. A farrier combines some blacksmith‘s skills (fabricating, adapting, and adjusting metal shoes) with some veterinarian‘s skills (knowledge of the anatomy and physiology of the lower limb) to care for horses’ feet.

Before anyone gets too upset, let me explain.  I firmly believe that horses should be barefoot.  I have also previously stated I would not turn to shoes unless I met a horse I was convinced couldn’t be helped without them.  Well, I’ve met that horse.  At the same time, I have been closely following the development and release of the Easy Shoe from Easy Care.  It is similar to the Epona that some of you may have heard of before.  This is essentially a plastic shoe that is designed to be glued or nailed on.  At this point, I am only planning to offer Easy Shoes as a glue on option.  Specifically, I plan to use the Easy Shoe Performance and the Easy Shoe Sport.   Here is a good article comparing Easy Shoes and Boots http://blog.easycareinc.com/blog/bootlegging/easyboots-or-easyshoes-yes

So why would I make this change?   There are a number of scenarios when people choose to shoe a horse instead of boot a horse.  In years past, I showed King in dressage at Falls Creek Farm.  Boots are not allowed in dressage and if I rode him on the gravel roads between the warm up arena and show ring, he would occasionally take those wincing steps.  His feet couldn’t handle the gravel, which is why he gets boots on the trails.  Easy shoes solve that issue.  Another example is the horse who needs 24/7 protection due to laminitis or founder  recovery, but destroys the boots out of boredom.

The initial reports are that these shoes last a full 6 weeks when glued on correctly and still allow a hoof to function as it should.  Because this isn’t a completely rigid metal shoe nailed to the hoof, it still allows the hoof to flex.  Since I will only be gluing the shoes, if you are interested, you must have a clean, dry area for me to work on the hooves.  At my farm, that means I will be shoeing in the garage since our barn floor is dirt.

As I have stated before, I won’t sell something I haven’t used.  So, as soon as my first order of shoes arrive, I’ll be gluing up the hooves of King and Calli. Glue on shoes will be $65 plus the cost of the trim.  If you are interested in having shoes glued on the next time I come out, please email me so I can make sure I will have shoes in the correct size and plan for the time required.

Founder is an advanced state of laminitis that is much more severe.  In a case of founder, the laminae has been damaged beyond repair and hoof capsule loses connection to the coffin bone.

Below is a list of causes of laminitis and/or founder.  The causes are broad and general in nature because many specific examples can probably be allocated under these broad categories.

1. Metabolic – excessive intake of carbohydrates and/or sugars.  This may be from grain or forage.

2. Overweight horse – As a horse becomes obese, the excess weight can physically cause laminitis.  Additionally, as the horse becomes overweight, it is more likely to suffer from metabolically induced laminitis due to the inability of the system to handle excess sugars.

3. Physical Trauma – inflammation in the laminae can be the result of a severe physical trauma to the hoof.  While hitting a jump with a hoof would not likely cause this, repeatedly hitting an immobile object could.  Another example could be a horse that stomps hooves on concrete flooring.

4. Internal disease, infection, or colic – Any system/whole body illness can have a negative effective on the hooves and could result in laminitis.

5. Chemical reactions – this can be a reaction to vaccinations or other pharmaceuticals administered to the equine.  This could also be the result of ingesting a chemical through forage (fertilizers or pesticides applied to pasture/hay).

6. Supporting limb laminitis – uneven weight- bearing due to an injury on the opposing limb

Laminitis is a challenging and complicated issue for owners, vets, and farriers/trimmers.  Research documentation can be found to prove, or contradict, any course of treatment.   It is difficult to lump all views and treatment options into a broad category such as conventional vs alternative, as many progressive vets are recognizing the value of a compromise between the options.

In conventional views, laminitis is generally a secondary issue to another problem.  Examples of primary issues include colic, retained placenta, excessive grain consumption, and supporting limb laminitis due to some problem on opposing leg.  Laminitis is generally accepted as debilitating with little hope for a full recovery.  Additionally, it is commonly viewed as a long term problem, although there is usually only significant focus on the acute phase of laminitis at the onset, when the most significant damage occurs to the hoof capsule.

Conventional treatment plans for laminitis vary so significantly, it would be an over simplification to simply list the methods of treatment.  The underlying commonality is the attempt to manage the primary initiating event, such as colic.  It is clear that by resolving or removing the primary stimulus of the laminitis, the acute phase will end sooner.  There is significant disagreement about how the hooves should be managed during the acute phase of laminitis, ranging from providing extra support to the coffin bone through the use of heart bar shoes to removing all support and leaving the horse barefoot.

Many pharmaceutical and veterinary organizations are pursuing chemical solutions to curb the effects of laminitis.  The belief is that the actual damage to the hoof can be thwarted if the proper chemical is identified and administered early enough in the laminitic event.  Until such an unlikely “cure” is developed, vets will continue to do the best they can and rely on what worked before.  Like most situations, prevention is clearly more valuable than treatment.

Alternative treatments to laminitis are generally any treatments that address the primary cause of laminitis as the method to stopping the progression.  Many practitioners who provide alternative treatment plans share some common beliefs about laminitis.  First, laminitis onset is almost always due to a metabolic upset.  The actual initiation may be from grain overload, pasture that is too loaded with fructan, or ingestion of Black Walnut.  One of the critical elements of treatment is to educate the owner on the impact of nutrition and dietary requirements. Then, aid the owner in making adjustments to correct the underlying metabolic problem.

Many horses that are laminitic show signs of previous, less severe damage in the hoof wall.  These indicators are important to distinguish between rapid onset cases, such as grain overload or vaccination reactions compared to gradual build up cases.  Regardless, steps to ease the pain of the horse should be addressed.  Vets will frequently prescribe the use of NSAIDs for pain relief for the horse.  The problem with this approach is it allows further damage to occur from motion as the horse does not get the feedback from pain.  In general, laminitic horses are better off not moving around to limit damage to the hoof capsule in the acute phase of laminitis.  If possible, it is better for the horse to actually lay down and unload hooves entirely.

Shoes should not be added to a laminitic horse.  In fact, it is better to remove the shoes to allow the sole to be loaded and minimize loading on the hoof wall.  Trimming to make the hoof wall passive, thinning the wall near the bevel, and backing up the break over point are methods a trimmer can utilize to improve the soundness of a horse.

There are also homeopathic and herbal treatments that some practitioners may incorporate, however, they vary depending on specialty.

Finally, the most important treatment is the education of the owner.  As previously discussed, owners must be educated on the nutrition and dietary changes needed to treat the situation, but also to prevent recurrence.  Furthermore, owners need to understand the internal damage that has already or is still occurring to prevent overloading the hoof from moving too fast in the recovery process.

Below are some pictures I took of a horse that was in a chronic state of founder with a severe thrush infection.  Notice how overweight the horse is and the condition of the hooves.  Those hooves were in the regular trim cycle of a farrier.  The farrier was using a grinder to trim the hooves.  Ultimately, the owner decided against my proposed treatment plan and I never heard from her again.